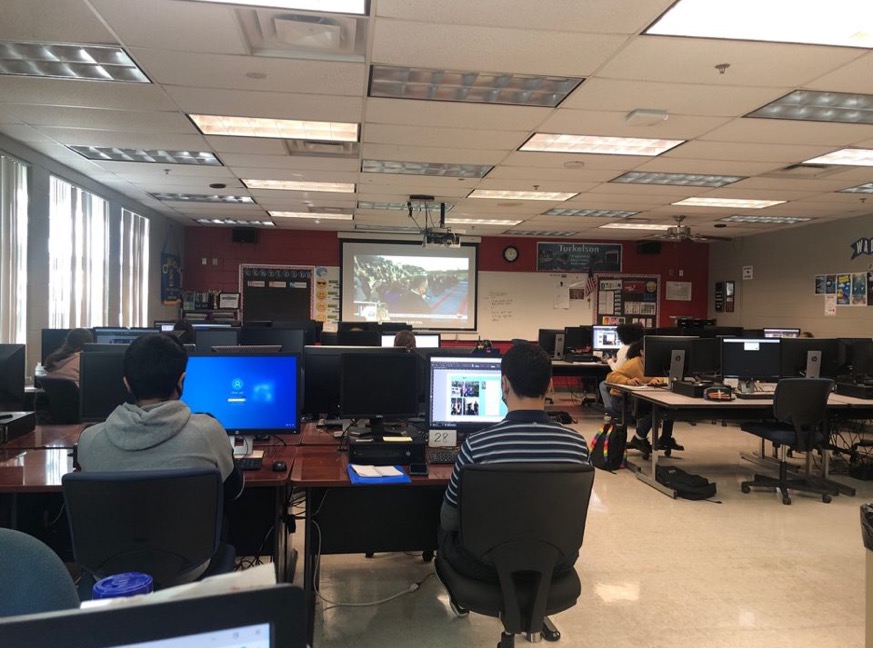 Katie Turkelson’s Yearbook class watched the Inauguration of President Joe Biden and Vice President Kamala Harris on Jan. 20, 2021. Allowing students to become involved with this monumental event reflects the importance of American values and the idea that all citizens are permitted to have and express their personal opinion. “I feel that Biden's speech benefits Americans who want to see a change in this country, especially coming from him,” senior Isaac Abdelmessih said. “Personally speaking, I did not agree or stand with Joe Biden this past election season; however, I think his speech went smooth and he addressed the points he wanted to. I know that his supporters most likely valued his speech and saw it as a difference maker in this country that some saw as becoming hateful and derogatory towards others.”

The inauguration of President Joe Biden and Vice President Kamala Harris was historic in many aspects and took place on Jan. 20, 2021, 11 weeks after the 2020 Presidential Election. In elections throughout the world, it is common for a newly elected leader to take power shortly after the election. In the United States, however, there can be as many as 11 weeks that pass between Election Day and the day of Inauguration. This period of time, called the lame-duck session, is important for a peaceful transition of power.

The lame-duck session allows the newly elected president to plan for a new administration and choose their cabinet. Although this period of time still occurred between Election Day and Inauguration Day, President Biden’s inauguration was modified to account for COVID-19 restrictions and outgoing President Donald Trump’s absence.  Despite this, the monumental event garnered a wide audience, from students to A-list celebrities.

At this year’s Inauguration, celebrities like Lady Gaga, Jennifer Lopez, and Garth Brooks attended. As well as showing their support for incoming President Biden, they set an example for younger generations by speaking up about what they believe in.

“I think the diversity of the celebrities in attendance was inspiring,” sophomore Luke Roberts said. “I think it showed that the new President tries to be a voice of all Americans.”

While the absence of President Trump was anticipated after his announcement on Jan. 8, 2021, it did not follow tradition of previous outgoing U.S. presidents. The last time that an outgoing president did not attend the inauguration of their successor was President Andrew Johnson, who refused to attend the inauguration of President Ulysses S. Grant and held his final cabinet meeting while the event occurred.

“I feel that Trump not attending was a message that he was trying to send to, not just Biden, but to other politicians in Washington D.C.,” senior Isaac Abdelmessih said. “I don’t totally agree with his absence, since almost every U.S. President has attended the inauguration if they had lost or not. However, it just shows that Trump didn’t take the results lightly and that he believes that he was cheated.”

The theme of the Inauguration was ‘America United,’ which was a major topic in incoming President Biden’s inaugural address considering the current political climate and split between party lines.

“I think the inauguration went well, given the fact that the national guard was heavily used to prevent any prospect of violence, but I think that Biden’s speech is something that all Americans need to hear,” Roberts said. “The speech’s main idea was, of course, unity. All Americans need to unify.”

To share and teach about the historical significance, this inauguration was shown in many classes around the country. Students learned the importance of democracy and the opportunity for every citizen to have their own opinion.

“I did watch the inauguration in my fifth period Yearbook class,” Abdelmessih said. “I remember how my teacher, Mrs. Turkelson and other classmates of mine, were discussing the inauguration of a new president and what that meant for the country moving forward. We chose to watch this important event because it only happens every four years. Everyone is entitled to their own opinion in this country, and my class watching the monumental event just reflects that idea.”

The 2020 Election cycle brought about many heated debates between parties. The American people’s passion for political matters was highly evident.

“Even if you don’t agree with the new administration’s politics and policies, it is fine, as that is what makes America and democracy,” Abdelmessih said. “I think Republicans and Democrats alike still have their differences; however, I think for that day they put them aside to welcome in a new administration.”