Loaded language in the media 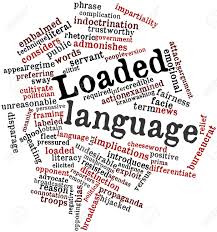 Loaded words are commonly found in today's media, it can be a dangerous manipulator to the minds of readers.

It is not an understatement to say that the media heavily impacts the ideals and information shared with the general public. To most readers, it seems abundantly clear what articles will share their own thoughts on the matter, and which will present only the facts. Readers can choose to look at factual articles to form their own opinions, or look at opinion pieces to understand and shape their own. Many seem to read a mixture of both, forming their own opinions first and then receiving insight from another point of view. However, some have pointed out that seemingly factual articles are using loaded language to attempt to manipulate the reader’s thoughts about events. Loaded language is threatening people’s abilities to form opinions on their own, and is going dangerously unnoticed. It creates double standards, and forces incomparable events into comparable categories.

Loaded language, by definition, is using words with strong implications to invoke an emotional response towards a situation. Used in the media, this rhetorical device can be extremely dangerous. When interpreted literally, an article may seem completely unbiased. However, opinions are rarely formed on fact and literal interpretation alone. The connotations associated with a word paint a picture of how the event should be interpreted, even before readers are informed of what happened..

Loaded language can be easily overlooked due to its popularity in advertising. People see an advertisement describing a product as “refreshing” and think nothing of it. And while something as simple as a commercial does not seem important, it numbs people to the common use of loaded language, and hinders them from noticing it in news articles. This puts many at risk of having pre-meditated opinions forced on them without their knowledge.

In light of recent events, many were quick to point out the differences in language when describing the BLM protests and the raid of the Capitol Building. Despite the unparalleled motives and actions of these events, news organizations still found ways to equate them. Based largely on the fact that they were both group gatherings with a specific intention, many found the Capitol break-in and Black Lives Matter protests described comparably. The media used the phrase “cult-like” when referring to BLM protesters while simultaneously speaking about the people raiding the Capitol as “grieving.” “Cult-like” creates images of hive-minded rituals and devastation, despite 93% of the BLM protests being peacefully conducted. Describing a group as “grieving” creates the illusion that they were sulking and quiet, quite the opposite of breaking into the Capitol.

When readers want to know someone else’s thoughts on a matter, they look for opinion pieces. But, loaded language does not openly look like an opinion, and can often be found in articles claiming to be unbiased. Without noticing this subtle rhetorical device, people are at risk of accepting opinions rather than fully forming their own. While some may say that loaded language should be used as an author sees fit, it should be found exclusively in opinion pieces, and not news articles.