Chadrick Richards: talent on the track 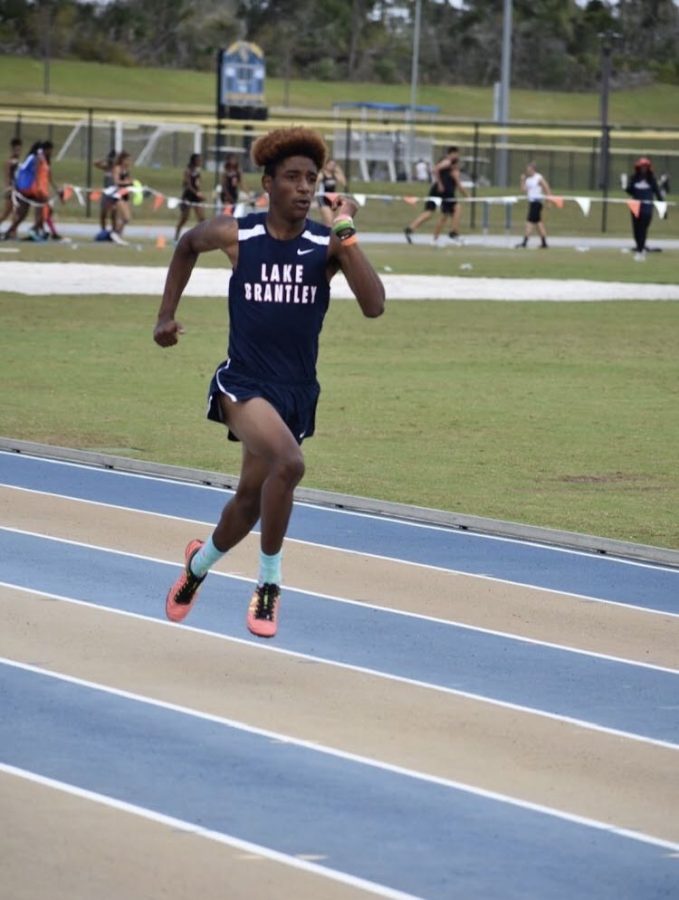 Senior Chadrick Richards competes in the 200 meter event at the districts gathering at Embry-Riddle Aeronautical University on April 10, 2019. “His work ethic from on the field to off the track is just great,” junior Relamp Ramirez said. “He is a good student and leader, and is always going on runs and workouts when not on the track, he is always putting in that extra work.”

Senior Chadrick Richards is a sight to see on the track, and a shining star off of it. Richards has been doing track since his freshman year, and is known for being one of the fastest students to ever grace campus.

He moved to Florida in eighth grade after growing up in Jamaica, surrounded by a family of runners, but the tradition is not the best part about running for him.

“[My favorite part is] running with my shirt off in the hot sun because it makes me feel alive,” Richards said. “Running takes a lot of heart and it can be fun and exhausting but it can get you somewhere.”

That somewhere for him includes colleges like the University of Kentucky, Georgia, South Florida, or Florida State. Sports have always been important to Richards, and his future major and plans reflect that after high school.

“I’m planning on running track in college hopefully for a D1 school [and] also trying to make it professionally,” Richards said. “I’m planning on majoring in physical therapy. I just like working with people about exercising the right joints rather than just taking a drug.”

Having belief in himself is equally as important for him as exercising. Before he runs, he finds it important to stretch and gather his thoughts. That moment pays off, especially when he breaks a record, whether it is his or someone else’s.

“When I break a record I just feel like [I] conquered something great but it’s just another step towards being the best I can,” Richards said.

From natural skill to hard work and everything in between, it is undeniable that he has talent on the track.

“[It] definitely [comes from] his drive to do better every day at practice and at races,” junior Relamp Ramirez said. “And his love for the sport and others, not only does he focus on himself but he helps the people around him as well.”

His teammates cannot help but feel his positivity, and that is one of the reasons junior Gabriel Jones is friends with him.

“He’s always so happy and outgoing that he’s really friends with everyone,” Jones said. “He’s one of the hardest workers I’ve ever met. It doesn’t make a difference if he’s on or off the track he’s always having fun and trying to encourage his teammates to be better.”