Sophomore Scornik on the court 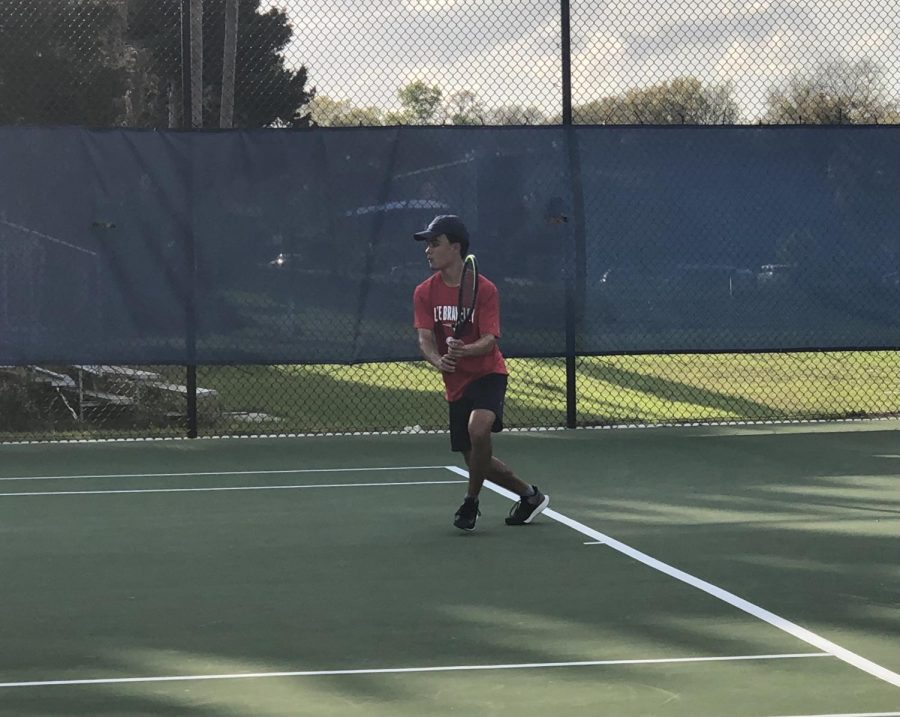 Sophomore Dean Scornik plays singles against Apopka High School. “My favorite part of tennis is the mental aspect and its individuality," Scornik said. "Tennis is a sport where you often have to rely on yourself and your mental strength in order to win tough matches."

“I have not deeply considered playing college tennis yet, but if I did, my dream school would be for UF,” Scornik said.

The University of Florida is ranked tenth in the top 10 best Division I Men’s Tennis Colleges in the United States. Scornik plans on accomplishing his goal by continuing to work hard during the off-season, playing matches to the best of his ability, and most importantly, maintaining a positive mindset.

“My favorite part of tennis is the mental aspect and its individuality,” Scornik said. “Tennis is a sport where you often have to rely on yourself and your mental strength in order to win tough matches.”

Scornik’s high position on the team also allows him to play doubles. Once the season begins, Scornik conditions himself mentally and physically to prepare for upcoming matches.

“Usually once the season starts I stay to a normal schedule and don’t train specifically for matches,.” Scornik said. “But, in general I run during the week and work on serves and ground strokes before a match. Mentally, I try hard to focus on clearing my head before a match, and this helps me to stay calm and focus on winning every point once I start.”

Scornik is not only a skilled tennis player, but also an academic achiever. He is currently taking AP Psychology, AP World History, Pre-Calculus, Spectrum, Language, Chemistry, and Spanish II.

“I had Biology class with Dean last year,” sophomore Rose Gardner said. “I mean he always aced the tests when everyone else basically failed, if not just did really horrible. I could ask him a question about something, and he’d always have an answer. He was always super positive and helpful.”

Although Scornik has a heavy schedule to balance between his school work and tennis career, tennis has benefited him in many ways, including academically.

“Sometimes it can be hard, but putting aside a couple hours a night to study and do homework has taken me a long way academically,” Scornik said. “I have definitely benefited academically from tennis. It gives me motivation to do well in school and makes me enjoy being in class more.”

Scornik has many accomplishments to be proud of, from his exceptional tennis career to his impressive academic performance, and a future for many more to come.

“I did this by working hard during the off-season and coming in with the mentality that no matter what position I am on the team, I want to do the best job possible,” Scornik said. “My parents inspired me to play tennis in the first place, as well as my coaches I had growing up. They taught me that above all, I should enjoy tennis and have fun along with getting better and winning matches.”