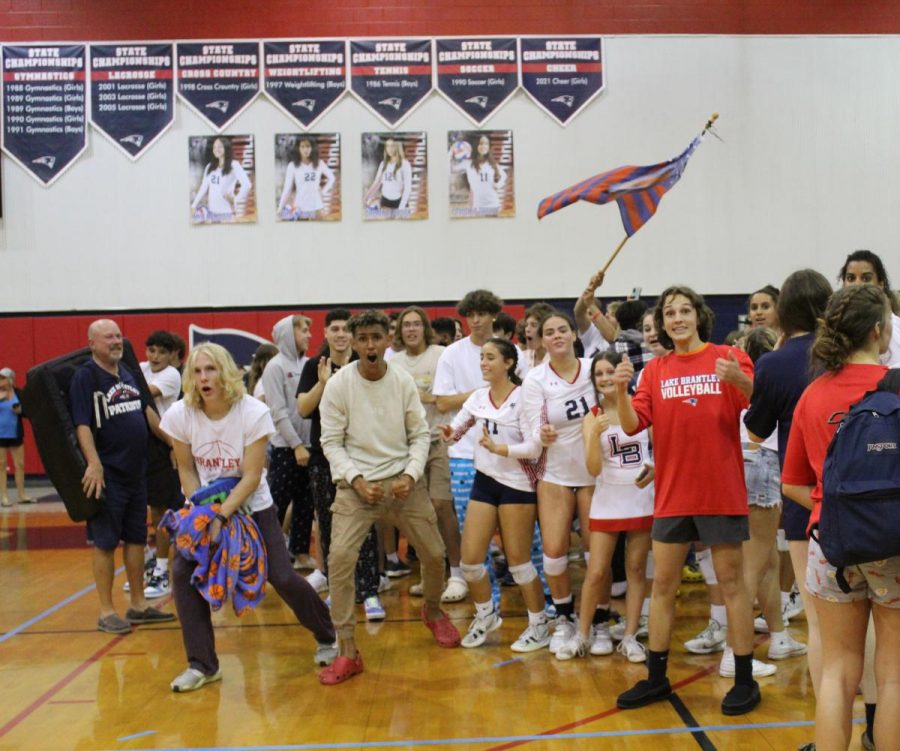 After taking the win, the student section crowds around the teammates to celebrate their win. This spawned a moment of celebration and a swarm of plaid patterned pants.

The Sep. 16 volleyball game was set as a pajama-themed night, leading to the gym being decked out in animal onesies and plaid pj’s. Holding onto their undefeated title of this season, the varsity team defeated the Hagerty Huskies after an intense five sets that lasted over two hours.

“Going into the game I was a bit nervous because I knew Hagerty was going to be a tough match but after the game I felt really accomplished and happy that we won,” freshman and varsity player Amina N’Diaye said. “After scoring the final point in the fifth set it felt amazing. It was a feeling I honestly can’t even describe. It was so exciting and all the stress of the game went away. It reminded me of why I love playing this sport.”

The final score resulted in Hagerty losing 3-2. The home team won their first and fourth sets, scoring 25-21 and 25-17, and played a nail-biting final round that ended the evening with another victory.

“The fifth set was very emotional, scary, and nerve wracking,” girls varsity coach Allan Knight said. “There were so many high and low moments, you just kept wondering how and when it was all going to end. But it never seemed to end. It was like being on a roller coaster inside a haunted house. During the final point I was just hoping and wishing there was something to give us an edge: a dig, a block, an ace. And when it finally happened it was such a relief for it to not only be over, but to be on the victorious side.”

The game was filled with stand-out plays from multiple teammates, one being a dive that junior Sarah Gooch took into sideline chairs to keep a ball in play, and another coming from first year member N’Diaye after hitting the winning shot.

“There were two plays that stood out that evening,” Knight said. “The first one was where Sarah Gooch went diving into the benches to save a ball that was going out of bounds. The second play that comes to mind was the final point of the evening. The play started with a block by Austin Knight causing the opponent to send us a free ball where Mya Mendoza set a perfect ball to Amina N’diaye for a monster kill to end the match.”

On top of the win the volleyball team celebrated, another perk to the night came courtesy of the student section. To take school spirit to the max, the Student Government Association and Leadership organized the Thursday night game to be pajama themed.

“The support of the student section impacts the spirit of the game because whenever our team makes a good play and we get loud and hyped for them, it boosts the players confidence and energy and they continue to ball out,” senior Luke Blecha said. “I dressed up for the PJ theme because it shows good school spirit and the better spirit we have, the more enjoyable and turnt the games are.”

The coach and players all have hopes for an ongoingly successful season and further have goals of winning the state competition.

“We have faced many tough competitors so far this season,” Knight said. “It is matches like this one that show what these girls are capable of. They have the ability to face down adversity and persevere through to the final moments. Having those experiences will hopefully give us the needed depth to make a deep run in the playoffs.”