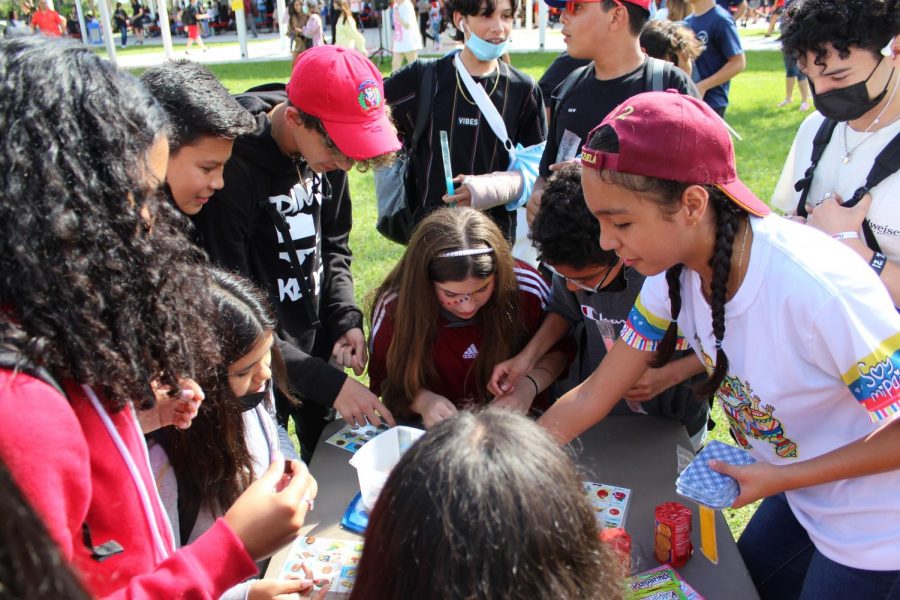 Students play La Lotería at the Hispanic Heritage Festival on Friday, Oct 15. La Lotería is a game similar to bingo, but uses images instead of numbers, and is originally from Mexico.

Friday, Oct. 15 featured a new lunch time activity: the Hispanic Heritage Month Festival. Organized by school clubs like Latinos in Action and the Spanish Honor Society, it had a wide range of activities and an array of food that every festival-goer could enjoy.

Leadership from those clubs, including senior and president of the Spanish Honor Society Priscilla Cederstrom, came together to decide on a multitude of activities and food stands, including face painting and empanadas.

At first, it may have seemed like just another pep rally, but there were certain activities unique to the celebration, like a piñata. Many clubs came out to sell food like empanadas and Italian ice, but there were also free popsicles that people enjoyed.

“So far, really digging this grape popsicle,” sophomore Sarah Cillo said. “I really love this. I’m Hispanic myself so I think this is awesome.”

The participation of students in both lunches created an atmosphere that enabled many to learn about Hispanic culture and the interconnectedness between many cultures around the world. Representing Afro-Latina heritage, Early Childhood teacher and Black Student Union sponsor Britney Lacarte attended, selling African bracelet kits, which are a traditional symbol of unity.

“I’m so excited that so many students are included and feeling like they are a part of this,” Lacarte said. “I honestly think this is the biggest participating crowd that we have had at a school celebration, so I’m just glad to see the kids involved.”

For those who enjoyed the festivities, they can further immerse themselves in Hispanic culture by joining the honor society.

“I believe you have to have at least Spanish 3, but if you don’t you can still be in it,” Cederstrom said.  “You just won’t be able to ask for scholarships until you’re done with Spanish 3 is what I believe.”

The most important part of the gathering was not the piñata or food for many students, though. While such festivities are great, it is the sense of community these festivals bring.

“I think the most important aspect is having representation for everyone,” senior Mars Arechavala said. “It’s really important that this happens, a lot of Hispanic heritage is overlooked. We’ve never had a celebration like this before, so it’s great for it to happen.”