Audra Greuel is named Teacher of the Year 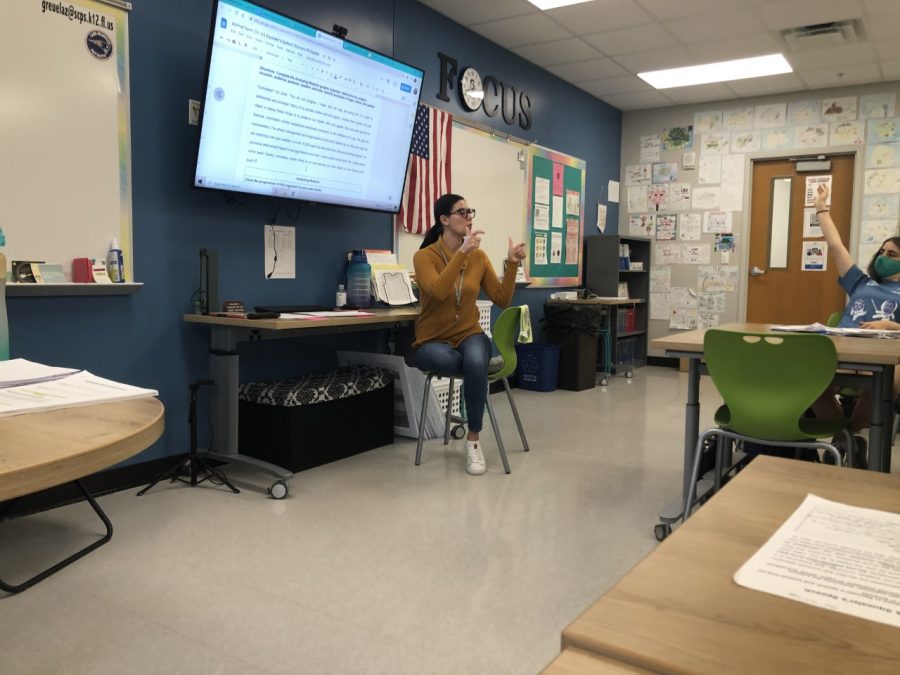 English teacher Audra Greuel sits in front of her students in her classroom, taking questions and encouraging class discussion about assigned reading. In order to nurture a friendly academic environment, she participates in back-and-forth dialogue with the class, exchanging ideas and thoughts.

In the midst of her second period on Monday, Oct. 11, English and Leadership  teacher Audra Greuel was still unaware of who would win the title of 2022 Teacher of the Year. While discussing a class reading with her students, she was surprised by the arrival of her parents followed soon after by Principal Brian Blasewitz. Moments later, Greuel received the announcement that she had been named Lake Brantley High School’s Teacher of the Year.

“I think that I was in complete shock,” Greuel said. “I knew that I was in the top three finalists, but you never know what the vote could turn out to be, so I wasn’t expecting anything. But I was very shocked, I couldn’t really even say anything — and I cried, because my parents came to celebrate and surprise me too, which meant a lot to me. I was just honestly shocked.”

Greuel sets herself apart by striving to have open conversation and an exchange of ideas between her and her students. By adopting an easygoing attitude, Greuel has adapted a teaching method that keeps her class environment friendly while also being suitable for academics.

“Whenever I enter her class I just feel a sense of welcome and excitement,” sophomore Manuel Restrepo said. “Ms. Greuel is always enthusiastic and happy to see us learn.”

Along with teaching English, Greuel also manages Leadership and helps coordinate the events put on by the club.

“She’s really dedicated to the class, and while it’s fun, she also makes sure that everyone gets work done,” sophomore Molly Freeburg said. “She makes us enjoy being part of the school and ensures that everyone is included.”

Even from a young age Greuel knew that teaching was a passion of hers and would be the path she was meant to follow.

In addition to teaching high schoolers every day, Greuel is taking classes on her own time to earn her master’s degree. Despite the difficult balance of simultaneously being a full-time teacher and a full-time student, Greuel keeps a positive and prepared mindset.

“It’s pretty challenging at times, because on some semesters I have classes at night from around 6:00 to 8:50, so I don’t get home until quite late,” Greuel said. “Sometimes I struggle because I have my own assignments going on that take away my attention, but I still come to class prepared every day.”

Weeks after finding out her new title, Greuel still feels immense gratitude and enthusiasm for the people who helped her get to where she is.

“I kept saying ‘I’m so happy, I’m so happy’ for like three days after it happened,” Greuel said. “I’m just extremely grateful for everyone, because I’ve made a lot of great friendships with other teachers here. And I’m just really honored that they thought I was worthy of the title.”