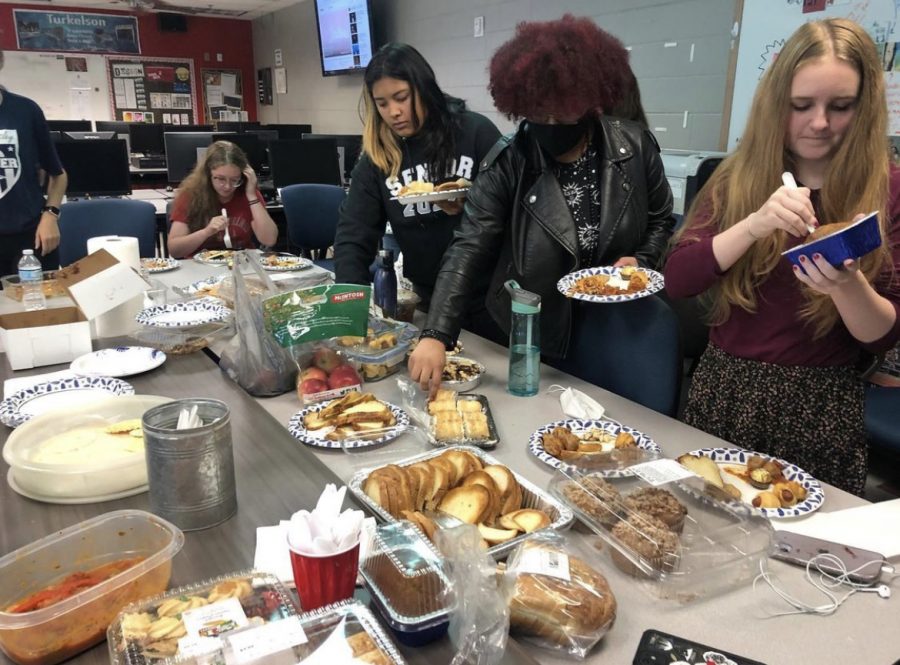 Students in Katie Turkelson's 5th period make their way around a table of dishes, buffet style, and prepare to share about their represented culture on Oct. 27. “It's very nice to know that there are people from your own country, like where you’re from, in the school because you know that you’re not alone and that you’re not the only person who is going through the changes of coming from a different country." junior Marcela Maya Escalona said.

The human condition of viewing life as a movie and casting ourselves as the main character is a nasty weed that needs pulling. The habit of constantly fixating on what is going on in our lives can often cause us to forget that the people we pass in the hallways or stand next to in the lunch line have a story just as meaningful and essential as ours.

On Oct. 27, career and technical teacher Katherine Turkelson structured her classroom around a cultural appreciation feast, for which students were encouraged to bring a specific dish representing their culture. On top of being a time for students to become intimately involved in learning about the lives of those they sit next to in class, it allowed for expressive and important conversations to take place. Around a table of sausage and potatoes, Italian wedding cookies, arepas reina pepiada, kimchi bokkeumbap and other dishes, questions regarding whether students felt their culture has been accepted on campus and how to grow an all-embracing school culture were discussed.

Junior Marcela Maya Escalona was one of several students who shared her story of moving to an entirely new country. While most students were likely focused on organizing their spring break plans at the beginning of March 2019, Escalona was mentally and physically preparing to leave her home country due to the xenophobia Venezuelans were facing in Colombia. Escalona explained the difficulty of having to trade in what she was accustomed to for a number of changes and shifts in culture in the United States. Cultural shocks included a difference of atmosphere in the streets, restaurant styles, customer service and levels of cleanliness. Aside from facing cultural impacts, Escalona had to also overcome fears of attending an unfamiliar school.

Looking past just cultural differences, a prominent subject matter that arose was the difference between acceptance and inclusion amongst peers. Acceptance is merely tolerating someone, simply acknowledging that they are present. Inclusion, however, accelerates the idea of acceptance by implementing action in the form of intentionally showing that one cares for, respects and values that person. When a school, community or group of people work to achieve an inclusive mindset that is likewise engaged and actively pursuing the needs of others, the potential for positive change is limitless.

While it is routine for people to band together in cliques, the lack of exposure to different upbringings, experiences and influences through kinship has the negative repercussions of inciting a blindness to reality, which can be dividing. This wall of ignorance is specifically apparent in school settings. As students tend to gravitate towards people of similar backgrounds and identities, it limits their scope to what is right in front of them, rarely opening any boundaries. True progression towards a society that is more actively focused on others can be accomplished through an attitude that seeks interactment with persons different from us. This begins with not only putting oneself in the shoes of another, but by–better yet–putting ourselves in their skin. As humans we need exposure to what lies beyond our perspective, in harboring a sense of empathy and becoming better versions of ourselves.