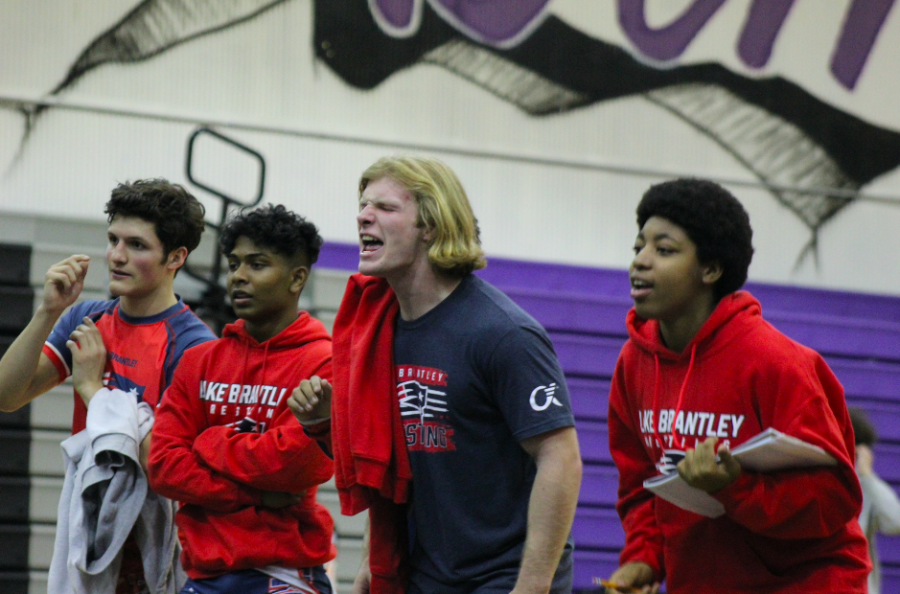 Team members watch competitors eagerly from the sidelines, hoping for a win.

On Jan. 5, the boys junior varsity, boys varsity, and girls wrestling teams participated in the Dual Districts Wrestling Tournament at Timber Creek High School. This tournament provided many opportunities for talented athletes to showcase their skills.

The members of the wrestling team exemplify true dedication to their sport, as they held a practice on Christmas Eve. This hard work and commitment paid off, with the team placing fourth overall and Captain and senior Kai Higgins being undefeated throughout the meet.

“This is the first year that girls wrestling has been officially recognized by the state,” Higgins said. “It’s one of the fastest growing sports in the United States right now. I’m a senior, so I’m super happy and excited to see Brantley get a girls wrestling team. I also think they have the opportunity to get individual attention because of how few participants we have now.”

Brantley wrestling teams are no strangers to busy schedules. Both the boys and recently formed girl’s teams have been very successful, with four athletes placing at the Lyman Christmas Tournament over winter break.  recently had a home tournament and plan to host two more later in the season, allowing for more chances for participants to compete.

“The girls have gained respect from the others, and we’ve definitely noticed that the coaches have put attention into making sure we are all developing,” said senior Veronica Picart. “I’m currently participating in two other sports, and wrestling is very different. You’re constantly moving and have to make a constant effort .”

Off of the mat, wrestling teaches some necessary life skills that benefit the athletes in all other aspects of life.

“We have three rules in wrestling, be on time, be prepared, and be respectful,” said Picart. “I refined my time management skills, and I am able to see myself improve through the help of the coaches.”