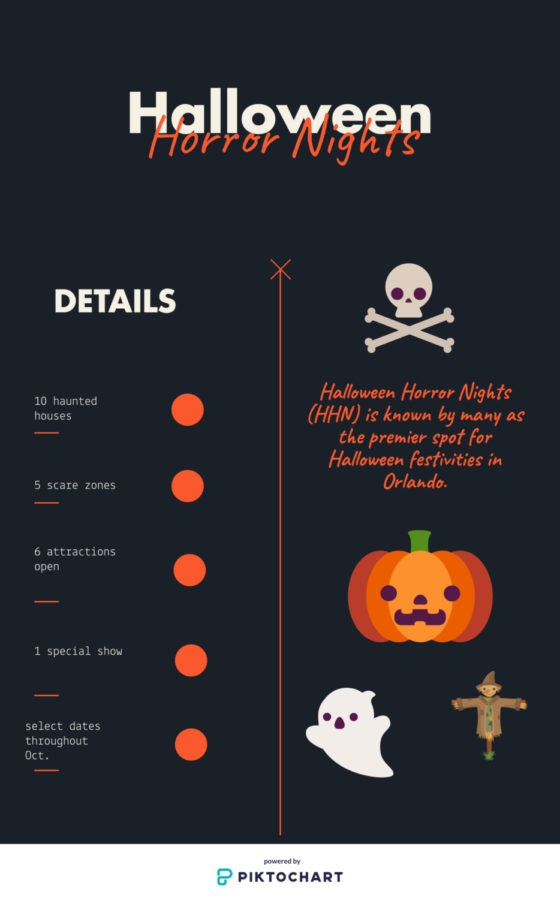 Halloween Horror Nights provides activities for everyone to enjoy.

As an Orlando native and a first time attendee at Universal Orlando Resort’s Halloween Horror Nights, I was in for a real treat, or trick, depending on how one looks at it. Halloween Horror Nights (HHN) is known by many as the premier spot for Halloween festivities in Orlando. Many fear-seekers flock to the park for various select nights during the fall season. The HHN 28 event features ten themed haunted houses and five scare zones, areas within the park that attendees can walk among nightmarish creatures that attendees may find in a haunted house.

For a ticket valued at $62.99, my experience was well worth the money. The event was filled with spectacular haunted houses as I would have expected due to it being dubbed as “The World’s Premier Halloween Event.” Each house was meticulously decorated and extremely contrasting in theme so it would not seem repetitive. The “Stranger Things” themed house mimicked the Netflix show to the finest detail, including the intense and scary scenes that have captivated audiences worldwide. In addition to this main attraction there were also houses featuring fan favorites like “Slaughter Sinema” and “Trick ‘r Treat” that provided a fun scare for Halloween lovers who wanted a classic thrill.

It was amazing to me how there was an absolute balance between fear and fun. Genuinely, the houses and scare zones were enjoyable even though I was nervous to enter them. The actors and actresses were never seen out of character and added to the realistic factor that the attraction promoted. For those wanting a break from the screams and shrieks of the houses and fear zones, the event also featured many fair games, activities, seasonal food and beverages, and decorations galore for photo opportunities.

After my first experience at HHN, it surely will not be my last; my only wish is that I had gone sooner. Facing fears and fun are a perfect pair that Universal Orlando executed deadly good this Halloween season.