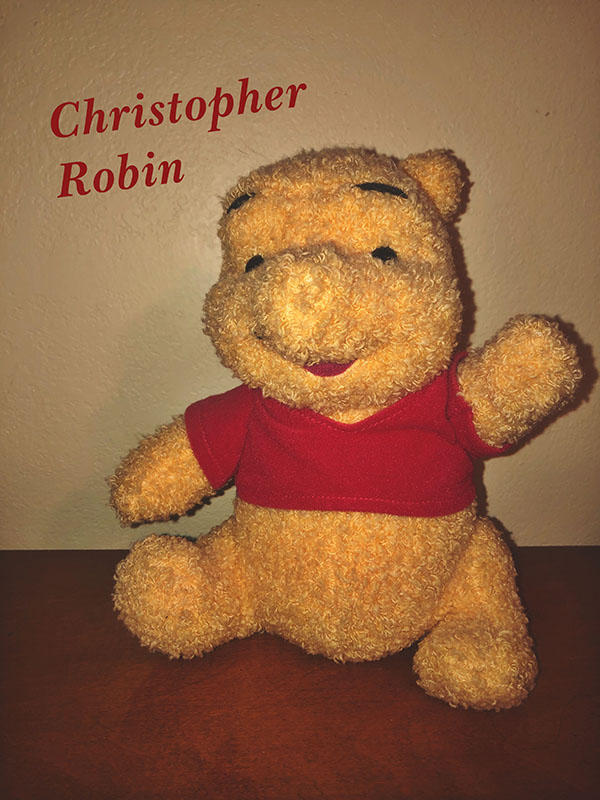 An old Pooh Bear stuffed animal is posed on top of a table.

The familiar children’s story of Winnie the Pooh gets a whole new look in the movie “Christopher Robin” directed by Marc Forster. Their adventure begins with Pooh (voiced by Jim Cummings)  when he discovers that his woodland friends (Piglet, Tigger, Rabbit, Eeyore, Kanga, and Roo) have gone missing. Faced with this troubling news, Pooh sets off into the real world, more specifically London, to find grown-up Christopher Robin (Ewan McGregor) in hopes that he can help Pooh locate his friends. Shortly thereafter, they realize that Christopher has lost something as well, something even more important: sight of what truly matters. The remainder of the movie is spent with the hundred-acre gang traveling back to London to help Robin regain perspective in his life, remember his childhood, and hopefully improve his relationship (that has been stretched thin by a demanding work life) with his wife Evelyn (Hayley Atwell) and daughter Madeline (Bronte Carmichael).

This retelling of an old tale was refreshingly heartwarming after a year of slightly more serious Disney movies, like “Black Panther” and “A Wrinkle in Time.” However, the film did not receive all the hype it deserved. One may have noticed that five star ratings and social media posts praising the film were few and far between. This could have been due to the film being stuck in a strange place between family-friendly and primarily for mature audiences. Its sweet representation of Pooh Bear and the childish troubles he found himself in were accompanied by a dark setting and real life problems such as careers tearing apart families.

The animation of the film, being very different from the original cartoon version of a bright orange Pooh Bear holding a full pot of honey, contributed a lot to the emotion in the movie. The story takes place well into Christopher’s adult life where Pooh and friends appear to have been well loved and fairly worn out. This brings about nostalgia for the past, as well as a child-like excitement for the familiar face of Winnie the Pooh.

The cinematography matched perfectly with the mood of the film. When the story brightened, the camera angles showed rays of sunshine and the smiling stuffed animals. However, when the tone turned dark, the sun went away and the heavy emotion of the characters could be felt easily.

Overall I believe that this film will be enjoyed by teenagers and young adults who have grown up with Winnie the Pooh. They should be more equipped to understand the heavy subject of the story and will therefore appreciate the ending much more.