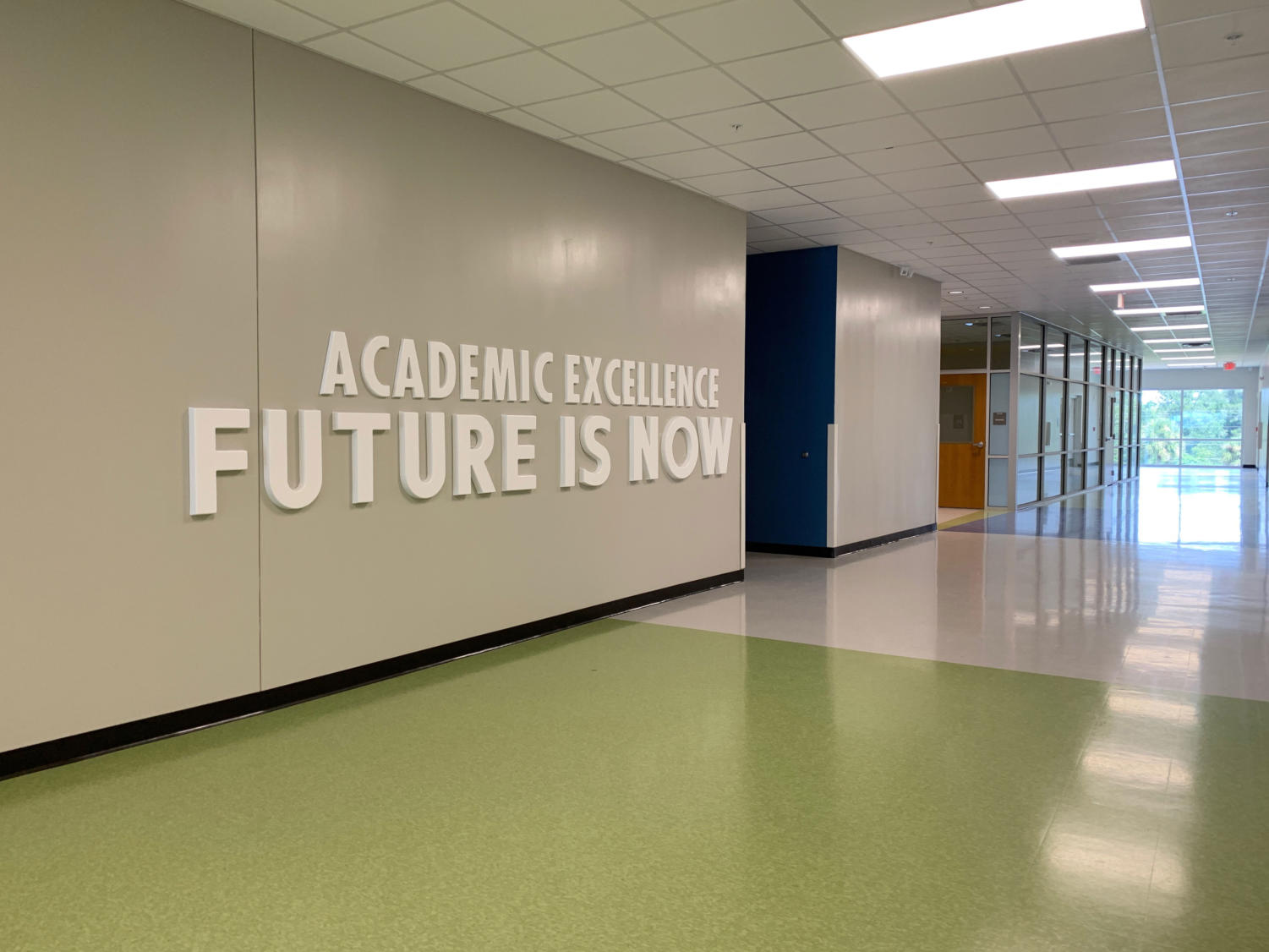 The new Building Five opts for a more minimalist design, with sleek lines and bright colors. The colors administration chose include bright green floors and chairs, blue throughout the building and a yellow stairwell. (Photo provided by: Cara Roth)

The new Building Five opts for a more minimalist design, with sleek lines and bright colors. The colors administration chose include bright green floors and chairs, blue throughout the building and a yellow stairwell.

The battle over Building 5

Since the construction of our campus’ new building 5, many students have differing opinions on all it has to offer. Do the dynamic classroom styles outweigh the traffic problems caused to get there?

Students walk from class to class in between periods. Due to the current concerns about school safety, Lake Brantley has added new gates, regulations, and security guards.

The recent addition of the new Building Five is the talk of the campus these days, though often in curses as students run between classes. The new building, despite its modern design and integration of technology into every classroom, is lacking in many respects.

The most glaring flaw is the foot traffic that rushes up and down the steps and through every doorway during the newly extended seven-minutes between classes. The building’s main staircase is packed with students within seconds of dismissal bells. While there are alternative stairways on the northeast and northwest corners of the building, utilizing them as exits only steers students further from the rest of the campus assuming they even know that the paths exist. These paths prove to be inconvenient and inefficient, as students must walk all the way around the building to even use them. With only one viable set of stairs to get to and from the rest of the campus, students are forced to push through crowds of those exiting on the same path. This creates a nightmare of tightly packed bodies prone to accidental falls, shoving and other accidents while haunted by the threat of a HERO.

To make matters worse, only the west side of the building, facing the Aquatics Center, has a sidewalk for students to use. On the south side, however, students face the gauntlet of chain-link fences and uneven dirt that leads to the rest of the campus. The students moving to and from the new building are crushed into narrow sidewalks enclosed by chain-link fences unless they choose the lengthy, “scenic” route through the beautiful new restaurant that will likely result in a tardy. As if these conditions are not bad enough, those traveling both to and from Building Five are forced to confront the simultaneous flow of students in the opposite direction since they are limited to one pathway. This creates larger crowds and adds to the difficulty of navigating Building Five.

The poorly planned setup is once again evident when students must see a guidance counselor during class. They must travel all the way to the new building and back, which wastes their class time simply due to the walking distance. This loss of class time extends beyond guidance counselor meetings, however, as every class has been shortened by a minute to account for walking time. This takes away time for teachers to raise test scores and prepare students for the world, with a total of 18 hours of instructional time lost each year.

An $18.5 million renovation is of little worth when students must rush between classes on crowded paths and up and down dangerously packed staircases just to get to class on time. The design of the newest building is inconvenient at best and dangerous at worst. It is an accident is waiting to happen until more paths are opened for students to travel safely and with less stress.

For more information regarding the building and budget, visit:

No Bad Vibes in Building Five 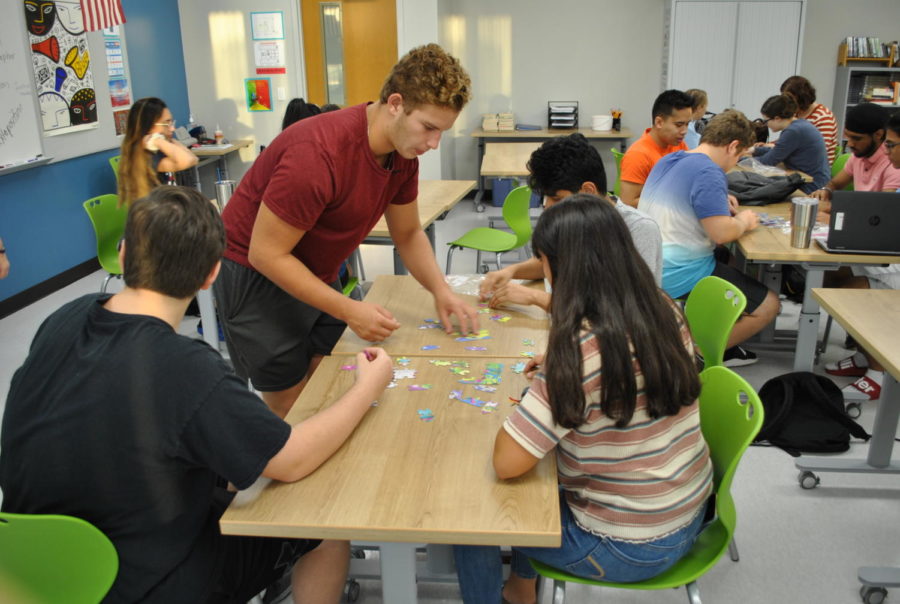 Seniors Keaton Johnson, Joshua Roberts, Arjun Mahamkali, and Rachel Narvaez solve an incomplete puzzle during Fitzgerald's AP Research class. The goal of the assignment was to show students that their project will have gaps that they need to fill with their own research.

There is something exceptionally exciting about the new Building Five. It might simply be a combination of bricks and pipes, but it is a new beginning. The past school year was hectic, but this is the proof that we survived. Maybe I am exaggerating for dramatic effect, but there is something extraordinary about the freshly painted walls and the faint scent of…Home Depot?

Due to the larger hallways, the building has an openness that mirrors a college campus and the large staircase looks like it is straight out of the cafeteria in “High School Musical”. Bright, fresh colors prove that administration stepped out of Brantley’s patriotic comfort zone and the large windows bring in the beautiful 7:00 AM sunlight.

This building has everything we did not know we needed. For instance, every classroom has desks with wheels. So practical, yet so unheard of. Not only is it efficient, it is a great way to incorporate collaboration and group work in the classroom and ensure students are prepared for teamwork in the career world. Not to mention, the technology is much more advanced than teachers were expecting. For example, the flat screen TV’s eliminate the clunky projectors that force students to learn in the dark.

I have heard many complaints about the foot traffic outside of the new Building Five, but the ends justify the means. This problem has a variety of solutions, like walking through the cafeteria or the mulch path next to the doorway, which are only temporary fixes as there should be several paths when the construction is done. If a student is so distraught about being late, they need to take quicker steps. Period. The only people who should be allowed to complain about Building Five are the staff and students who did not have the opportunity to teach/learn in a setting so new and state of the art.

As far as functionality goes, many aspects of the new building make sense. For example, having all of the counselors in one building avoids confusion for new students. I distinctly remember being a freshman roaming around campus like a lost puppy looking for my counselor. Additionally, the idea of having the girls’ and boys’ bathrooms in separate hallways has always perplexed me. Now that they are side-by-side, students do not lose class time having to walk to a different hallway.

As a senior, I have seen some dramatic changes across campus, both good and bad, but Building Five is clearly a step in the right direction. As my overly-enthusiastic friend, Carson Cashion, once said, “In a way, Building Five mirrors life. In a way, it saved me.”