‘Progressive’ is not the right word for the tax system 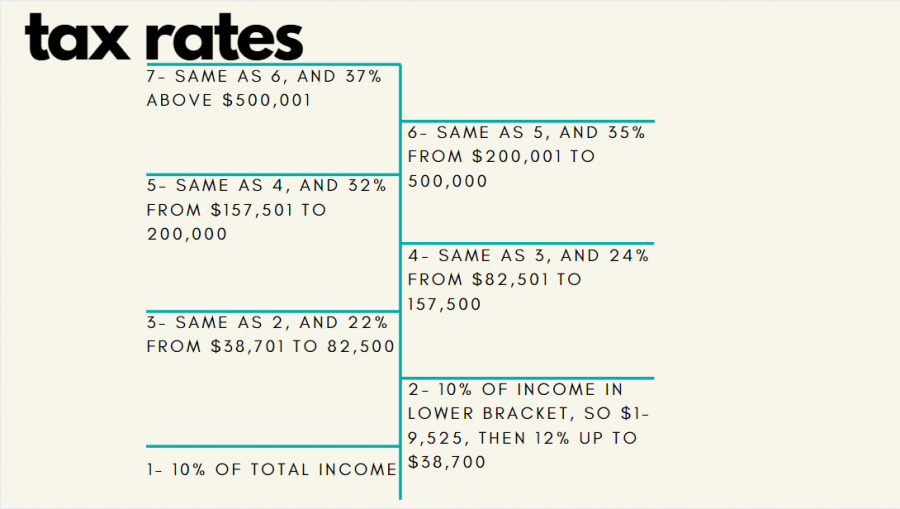 The information shown above is from taxfoundation.org's '2018 Tax Brackets' article. In it, the breakdown of how much a single person pays based on their income is detailed.

In 2018, Americans earned about 11.65 trillion dollars. The IRS took around 1.54 trillion dollars from 154 million tax returns. This amount of money seems great for the government’s purse, but what really matters is who the money is coming from. With a progressive tax system, different income brackets get taxed different amounts, which seems fair at first glance, however, it is unfairly biased for the top 1 percent of earners,  who can find loopholes that the average taxpayer cannot. This needs to be corrected so it is a better system all around.

The average taxpayer carries an unfair burden compared to the top 1.1 percent.  The fact of the matter is, the tax system needs correcting. We need to save the loopholes for those that need them. We can afford to implement a sliding deduction rate, where taxpayers in the bottom brackets get higher deductions than those in the top. We need to be kinder and more fair to the majority of our country who are in the bottom three brackets and carrying a burden that should not predominantly fall on their shoulders.

While in the past, a system like this would have made sense, it does not now. When the Revenue Act of 1916 implemented the progressive system, there were fewer rich people than there are now. Also, the average income rate was lower back then. It made sense at the time for the amount of people they had, but as the population grows and shifts how many people are in each bracket, it no longer does. The range of income for brackets is adjusted for inflation, but it doesn’t take into account how many people are in each bracket like it should.

The main point here is that the system is a nuanced, complicated trap. The amount  of money owed to the IRS is based on your salary, but how taxes are filed also plays a part. If an individual is married, they can either file separately, jointly, as a single person, or as  head of a household, which all affects how much they owe. Then there are deductions, which can be influenced by the number of claimed dependents, and donations to charities, to decrease the amount of money paid. For taxpayers making enough money that they can afford to find them, loopholes to lower taxes are there. This is unfair, because these people can afford to pay their full share of taxes, and should not get to take advantage of loopholes that others need more than they do.

With money comes power, and there are those that say rich people should be able to do whatever they want. However, we cannot cater to a minute portion of taxpayers just because they have the money to get away with things. It takes money away from important programs like Social Security and national security, and it is  not fair to any of the taxpayers who are paying more than they can afford to.