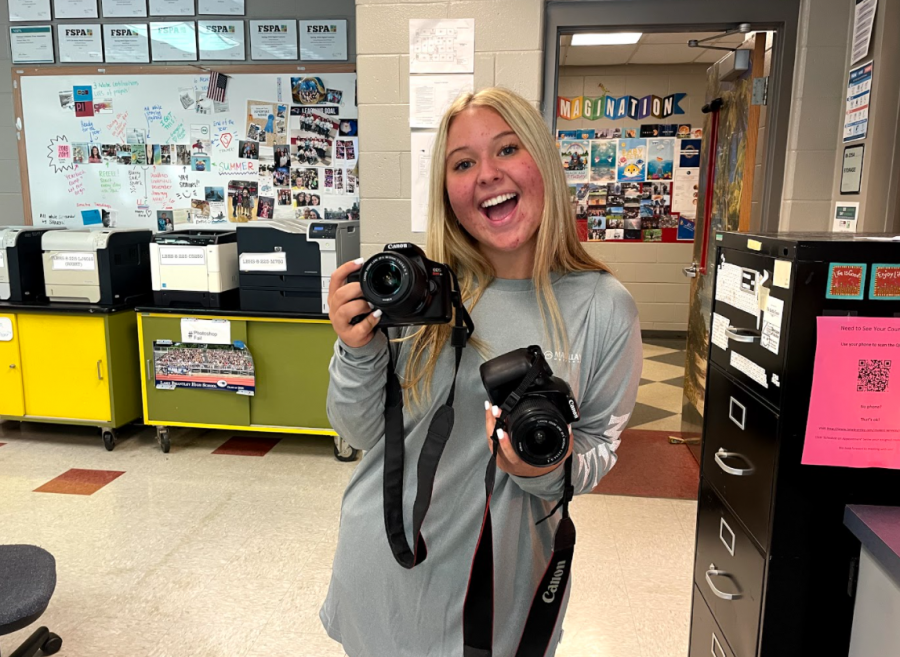 Treasurer of film club and junior Hannah Williams has fun with cameras. “I’ve never worked with film so I think it will just automatically increase my interest. I know only like two people that have worked with film in that class so it is pretty cool that we are all new to it.”

On Aug. 26, the newly revived Film Club on campus hosted their first ever meeting. While in past years the social organization was known for learning about and creating cinematography, the teacher sponsor and student officers reimagined the club to be more focused on photographic principles.

The art of taking photos has changed drastically by the evolution of technology. However, Film Club has chosen to take a unique and old-fashioned approach by exploring the various aspects of picture-taking techniques from an earlier time.

“Film Club is a photo club where instead of using digital photography we develop our own film,” senior and club president Joya Ogier said. “It is another type of photography I have never used before and I am growing my knowledge on it.”

The club offers students an opportunity to learn about and get hands-on experience with traditional ways of taking pictures. It also allows participants to do so in an environment that is less rigorous than a normal class setting and at their own pace.

“In the club, students will have the chance to shoot, process and print 100% analog style,” performing arts teacher and sponsor Alex Garver said. “Meaning no digital cameras or Adobe Photoshop; old school like the masters. There is less pressure and less of a stigma in failing an attempt at processing film. No grades and all the students have an interest in what they are doing. They can help each other in ways they typically cannot in class.”

The Film Club officers have already started planning for future events for members to participate in. One of these activities include a photo shoot inspired by a Halloween-themed TikTok trend.

Considering the ongoing concerns surrounding COVID-19, activities on campus in general started off with various uncertainties. The members of Film Club, however, look forward to sharing and growing their passion for photography while also making meetings an excitement for all.

“While it may seem like things are getting worse out there with COVID, I have hope that it will get better,” Garver said. “This year is as good of a year as any to have student organizations return to Brantley.”

Donate to The Brantley Banner
$100
$500
Contributed
Our Goal
Submitting donation...