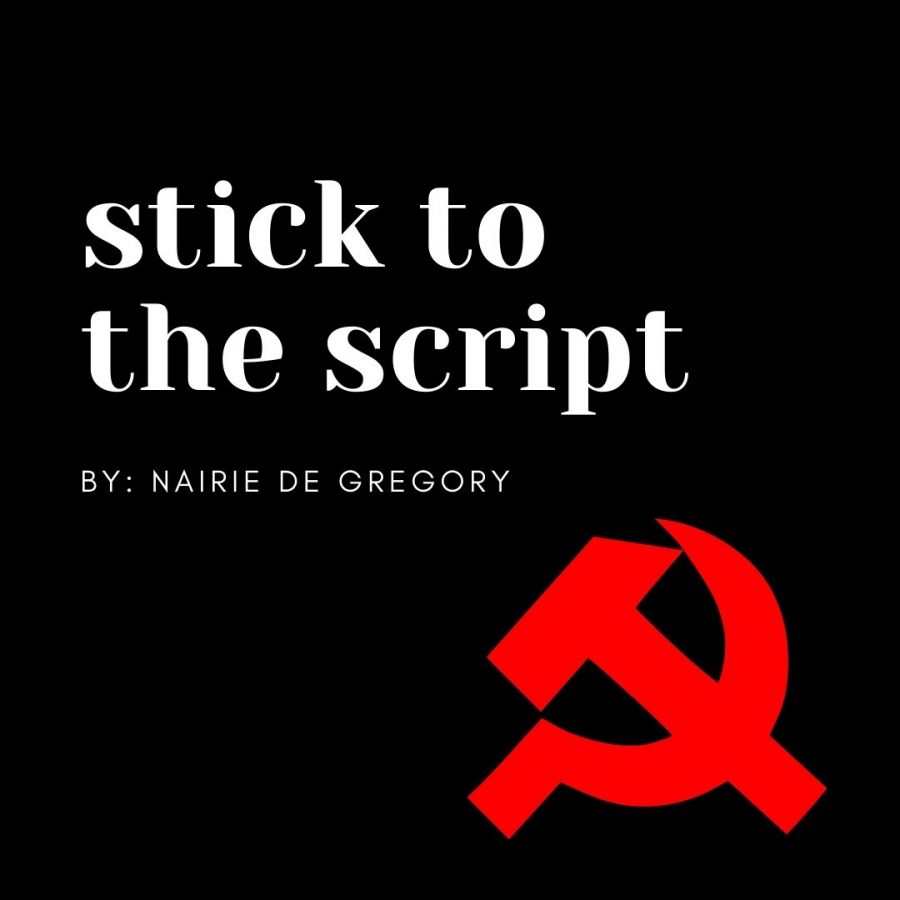 Stick to the script

Ring! Ring! The bell to start the second half of the school day rings. Children flooded back to their classrooms. Everyone sits down ready to resume the 2nd half of their English lesson. One girl in particular is very excited. Her name is Ani, and for only being 11 years old she is quite a smart kid. She’s top of her class. “Alright class, quiet down.” The teacher said, Ani liked her teacher, but she didn’t really have standards for her teachers. Her job as a student was to show respect and learn. “This afternoon we will be hearing about the portraits and the posters that are on the top of the blackboard.” Ani knew about this. She knew who was on top of that board. It was a guaranteed success. The teacher went up and took down two posters. She quickly showed them to the class. One was painted with the Ruler and what looked to be many people around him with happy faces with the saying “The Soviet Union – the backbone of peace and progress around the world!” and the other with a bunch of military men looking to go to war with stern looks painted on with the slogan “The Soviet Army – the indomitable patron of peaceful building and the guardian of peace.” Ani’s heart sank. She knew the subject that was about to come up. As her teacher was explaining each of the artworks a kid raised his hand and said “Comrade. This is beautiful artwork.” The class nodded their heads. “It is. This is art of this nation. This union.” Another kid raised their hand and asked, “But why did they decide to paint those?” The whole class went silent. The teacher looked up at him and spoke clearly “Well they didn’t really have a choice. If they choose to paint, they must paint what the union asks them to. Nothing else.” More silence. “Alright then. Let us ask a different question. Children, raise your hand if your parents are a part of the Communist party.” Everyone in the class raised their hands, that is everyone except for Ani. “Ani, come up.” The teacher’s voice was strict and a bit scary. Ani walked herself to the front of the classroom. “You will stay here for the rest of the day and think about why your parents aren’t members.” And so, Ani stood there for as long as she had too.

The day was over, and Ani was now walking home. As Ani entered her cramped apartment her mother, Valia, greeted her. “Hi sweetie, how was your day at school?” Right then her father, Paul, came out and greeted her too. “Yes, how was your day?” Ani sat down “Horrible. The teacher showed some awful art and then asked whose parents were a part of the party, and when I didn’t raise my hand, I had to stand and think about why you all were not a part of it.” Ani started to cry. “Why aren’t you guys a part of it Mama?” Her parents started laughing. “Why aren’t we a part of it?!” Her father said “Well, there are many reasons for that. For starters there are not any basic rights. I have to watch what I say to my students. One word out of line by the government’s standards and I have eyes on me constantly. We cannot say what we want for fear of being taken and never seen again. Fear that the neighbors will report on us.” “Ani,” her mother began, “we believe that people, no matter who they are, should have the same rights.” Her mother said, “We know that not being a part of the party is not the smartest with everyone around us, but it’s the right one.” Ani stared at her parents and deep down she knew that they were right.