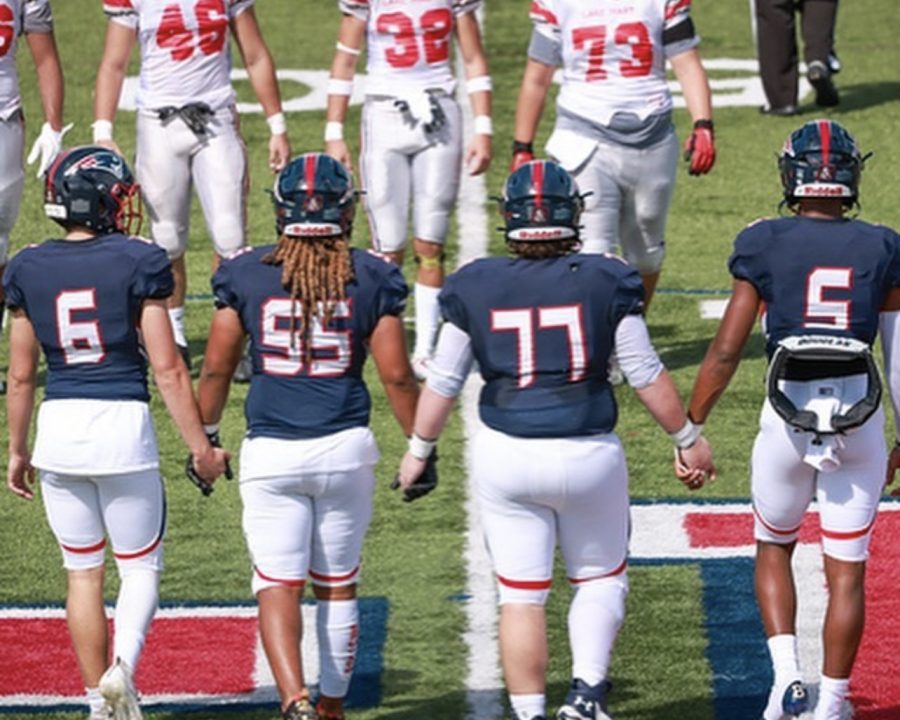 Prior to the kickoff of the game against Lake Mary High School on Sept. 17, the captains walk united to meet with the referees and Lake Mary captains. “Our team is special,” Woodson said. “We are one big family and we have the ability to beat anybody as long as we stick together.”

Torrential downpour and blaring heat, field underwater and a weekend game; the varsity football team persevered through the multitude of obstacles and took home the Mayor’s Cup in a long anticipated rivalry game on Sept. 17. After being postponed to the weekend because of weather difficulties, the team defeated Lake Mary High School by one point, ending with a final score of 22 to 21.

Heading into the game with a week full of spirit and a rambunctious student section behind them, the team looked forward to getting their chance to take on Lake Mary, and despite the 100% chance of rain that began an hour before kick-off and the postpone to the next morning, the energy that the Patriots brought was indisputably high.

“As a team, we were already really amped up about the game and were ready to get out there that night, and by rescheduling it it kind of made us more eager and helped us be ready the next day,” senior quarterback and captain Braxton Woodson said.

This match-up is a rivalry that has lasted decades and, although Woodson was leading a team that had not beat Lake Mary in seven years, the team overcame all odds to earn the win.

“My mindset was to win the game by any means necessary,” Woodson said. “For the past seven years, they have beaten us and we couldn’t let it continue. This attitude was something that I have been stressing for weeks leading up to the game, and it worked. My teammates knew what our goal was and worked hard to achieve it.”

Although the game was close the entire time, senior and University of Central Florida commit Andrew Harris helped secure the win late in the game.

“When Andrew Harris got the pick-six in the fourth quarter, that kind of brought a spark of energy throughout the team and helped motivate us to the win,” Woodson said. “After that, I scored a touchdown on a five-yard run late in the fourth quarter and a two-point conversion to put us on top, but we were only able to win because of the effort that the entire team put in.”

Although exciting the entire time, once the game “turned tides” in the Patriot’s favor, the Patriot Pride student section got even more charged.

“It was electric,” senior Eric Entrekin said. “From Friday night to Saturday morning, the student section showed out, and right before Braxton scored, the student section got quiet because there was so much on the line. When he scored the two-point conversion, everyone went absolutely crazy.”

The recent hype and continued win-streak that the team has received is largely due to the spirit that the players themselves have brought.

“This game just really shows the kind of kids we have in our program,” assistant coach Mike Mitchell said. “Since our loss early in the season against Oviedo, we have been able to work out the kinks and really just show how competitive our team is. They are just a very special group and I can’t wait to see how the rest of this season plays out.”

Coming off of the high of winning one of the most important games of the season, the team focuses on continuing their win-streak and making it to the postseason.

“This win means everything to me,” Woodson said. “The football team has been working so hard over the summer and we were just glad that we went out there and proved that we are better than those guys. This game really gave our team a lot of confidence. We feel like we can compete with the best of the best and finish the season strong, especially in the upcoming playoffs.”

Donate to The Brantley Banner
$25
$500
Contributed
Our Goal

Your donation will support the student journalists of Lake Brantley High School. Your contribution will allow us to purchase equipment and cover our annual website hosting costs.